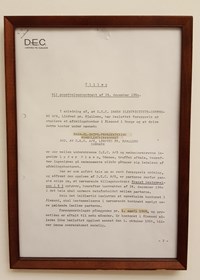 In the Spring of 1966, DANSK ELECTRICITETS-COMPAGNI A/S, with Mr. Lindved pr. Hjallese decided to open an branch office in Ålesund, at the west coast of Norway. The name given was SKAN-EL-SKIPS-PROSJEKTERING KONSULENTVIRKSOMHET AVD. AV D.E.C. A/S. 1. April 1966 the branch office was officially opened and it was managed by Engineer Mr. Lyder Olsen.

In 1987, the company moved to Spjelkavik and was established as an stock company, SKAN-EL SKIPSPROSJEKTERING AS. The main work was engineering of the electrical installations onboard all kinds of vessels. In the beginning of 2000 a lot of inspection jobs was carried out in China on behalf of Owners of cargo vessels.

The need for electrical competence made Skipsteknisk AS taking over the company in 2006. It was further renamed to SKAN EL AS in 2008, as we know it today. Skan El AS is fully owned by Skipsteknisk AS.

In 2012 the company moved to new locations in Lerstadveien where you can find us today.

Skan El has developed into beeing an independent marine electrical engineering and consultancy company. Now with more than 50 years in the business of design- and projecting complete electrical installations onboard ships and consultancy services to Owners and shipyards all over the world.

A lot of water has passed the bridges since 1966 when this firm was founded. Our senior engineer today has been in the firm since 1974 and still going strong, others have more than 25 years in the firm. Combined with this experience and new employed engineers with just a couple of years on their back after 3-5 years of technical school education, Skan-El intends to be a leading firm on this area in many years to come.